Independent Venue Week will return for its fifth year July 11 – 17, 2022. Today, the event announces Big Freedia as 2022 Artist Ambassador and shares the first round of venues set to participate in the week-long series of programming celebrating the spirit of independence, powered by a partnership with See Tickets.

2022 follows four years of growth for Independent Venue Week which for its 2021 edition featured 450 shows in 350 venues throughout all 50 states, Washington D.C., and Puerto Rico. More than 270 venues across 167 cities are already signed up to participate in this year’s event. From small rooms to large capacity spaces, in major cities and small towns, this year’s participants represent the wide variety and personality of independently owned and operated performance spaces. Returning venues include Minneapolis’ First Avenue, Cleveland’s Beachland Ballroom, and Seattle’s The Crocodile as well as first-time participants including NYC’s Brooklyn Made and Philadelphia’s Underground Arts. More venues are to be announced in the coming months.

Independent venues and promoters can still sign up to participate HERE

See Tickets; the global ticketing company also supported the 2021 US edition Independent Venue Week, this year’s UK event, and is an underwriter of the ‘Independent Venue Speak’ podcast series.

Known as the larger-than-life ambassador of New Orleans Bounce music, Big Freedia is a nationally recognized hip-hop artist, TV personality and cultural influencer. In addition to releasing her own critically acclaimed EPs, ‘3rd Ward Bounce’ (2018), ‘Louder’ (2020), and ‘Big Diva Energy’ (2021), Big Freedia covered “Judas” on Lady Gaga’s Born this Way The Tenth Anniversary album (2021). The Queen of Bounce also appeared on numerous high profile projects, including Beyoncé’s Grammy award-winning, “Formation,” and on Drake’s “Nice For What,” where she brings her distinctive voice and signature catchphrases to all her work.

Big Freedia is known for her infectious energy and personality. In 2019, she was the official host for the Met Gala IG Live Stream Red Carpet event and a host of 2021’s Dick Clark’s Rockin’ New Year’s Eve TV celebration. Known by her fans as the “Queen Diva,” Big Freedia is a loud and proud advocate for racial and gender equality and LGBTQ+ rights.

In 2021, Big Freedia was honored as one of Ebony’s Power 100 and she has appeared on NPR, The Breakfast Club, The Problem with Jon Stewart, The Late Show with Stephen Colbert, Jimmy Kimmel Live!, and The Real. Big Freedia’s ascension in the music industry was chronicled over six seasons in the highly-rated reality show, Big Freedia Bounces Back from 2011-2016 on Fuse TV. Her critically acclaimed 2015 memoir, God Save the Queen Diva (Gallery Books/Simon & Schuster) was released in paperback in 2020. 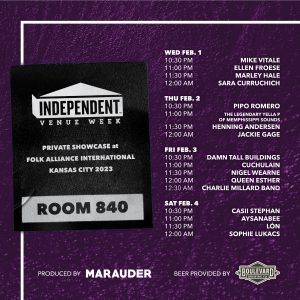 We’re excited to present the Independent Venue Week showcase at Folk Alliance International 2023 in Kansas City next week on February 1-5, which