He might not be taking an instruments with him, but Radiohead’s Philip Selway is hitting the road for Independent Venue Week 2019. The drummer and solo artist is jumping in a van, and will be visiting a series of venues throughout the week (see below for details) as part of a documentary he’s creating with us. Selway initially started as an interviewee in the production Independent Venue Week are making with the people behind acclaimed documentary Last Shop Standing (Blue Hippo Media), but he was so taken by the subject that his role has grown… leading to his own unique IVW tour. Selway spoke to IVW about his love of independent venues, his plans for the film and how you can get involved with the tour and film.

Hi Philip, did you expect to be starting your year doing a road trip around IVW19?

It has evolved very recently! [laughs] I originally went along and did an interview for an IVW documentary last November in Oxford at the Jericho Tavern. It was the venue where we started with Radiohead and we did the interview and then got talking to IVW founder Sybil Bell about it and the idea of a road trip came about. I’ve got quite a romanticised view of that whole process – that whole period of touring for us – so I wanted to go back and reconnect with that. To return to venues we played at, and ones I’d done solo as well, to just try to understand what it was I find so appealing about those venues.

You’ve had two bites at independent venues, once with Radiohead and then more recently with your solo stuff. Had things changed much?

No! Gear has improved since we first toured those venues in the early 90s, but it was all still very recognisable. All these venues are driven by a personality at the heart of it, who are completely committed to what they do and draw in a wider community around them. That was the same, as was the rhythm of the day. A show day is still very similar to what it was.

That’s encouraging that those values have survived and the experience for the artists playing those venues remains.

What was lovely was finding new venues too – well venues that were new to when we’d been out – Brudenell Social Club in Leeds, for example. There’s a sense that it’s still a vibrant scene. It’s tough for the promoters to do it, but there are still new venues coming through and that felt really healthy.

So explain what IVW19 will be for you?

I’m going to be in my van which we’ll be going round in. We start at Bath on the Monday, then going to a different venue every day of Independent Venue Week, so it’s a road trip and we’re hoping to meet the people who work in the venues, the wider communities around them and the artists playing, to see what the experience of those venues is like for them. And we’ll be stopping at plenty of services stations along the way too. That’s always my favourite bit [laughs].

You must really like touring if you’re going on the road but not actually playing?

Well, it’s just for a week so that’s a little bit of a treat for me.

Who are you hoping to met?
I’m really keen to speak with the gig goers as well as the people involved in or playing the venues. Back in Oxford where I live and where we started Radiohead from, you find that community of people who run everything from the music paper to the local record shops.

You’ll be seeing some acts you haven’t seen before?

We’ll be seeing Novelist, he’s the IVW ambassador this year, so that’s brilliant. Then I’m seeing the Howl & The Hum in Sheffield and Talk Show as well. It’s a real diverse range of acts. These venues are such a good place to connect with music. You have that opportunity to be up close to the acts and in a lot of instances you’re seeing these very nascent artists too. Something that’s really starting to form.

Those gigs at these venues are often a key moment for the artist involved, aren’t they?

You’re finding your feet, and there’s that sense that it’s growing. It’s a vital time for new acts when they’re playing these venues, there’s that make or break aspect of it. There’s a real immediacy to the performances. I remember it from Radiohead’s point of view when we were doing it, you get a sense of all the bands who had played the venue before. On the dressing room walls the acts would scrawled their names and they would be bands that you’d been in to, so that makes you raise your game. There’s always a rush to seeing bands in these venues.

It’s often claimed that without these smaller venues you don’t get acts capable of playing bigger venues – your personal experience bears that out, doesn’t it?

Absolutely! You come to these venues and you really learn your craft. Before Radiohead signed we’d barely played outside of Oxford. I think we’d done over five years about seven shows, all in Oxford. So there’s no way you’re going to be a sparkling live act on that experience. So to be able to go out and continuously play the smaller independent venues was where we really started to find our feet. We had a pretty distinctive character going into it, but when you start playing those venues it brings your voice as a band into focus. You do hear of bands that suddenly leap ahead and find themselves on a much larger stage from the outset, that must be petrifying because you don’t have that experience that you build up in these venues. When you first play them it’s a scary experience, you’re playing in towns that aren’t your own, to people you don’t know – up to that point you’ve played to friends and family – so you’re out there, viewed as a proper band. Those venues are a good place to get a sense of that and I found it a very supportive circuit too. It helps to build your confidence as an act.

There’s always a rush to seeing bands in these venues

Each day we’ll do a short video diary which we’ll put out via social media, and Steve Lamacq has asked me for an audio diary each day too, which is fantastic, so you’ll hear that on BBC 6 Music. Then I’m very much hoping people will come a long and find us at the venues and say hello too. Then in the long run it will become a documentary which I’m looking forward to seeing.

Just so you are not besieged by lots of demo tapes, what would you like people to bring if they’re coming to meet you during IVW?

Chocolate! No, stories of the bands and acts you’ve seen playing in independent venues and anecdotes of how these places have defined aspects of their lives. That’s been my experience of music. That’s how I found my own way, through my record collection and the bands I went see live – and then by going out and playing those shows myself. Also, if anybody has any local press clippings we’d like to see those. Like in Oxford, we have Nightshift and you can go back through that and find first interviews with various people – we did our first interview with Nightshift, so did Foals and people like that. So those kind of items are really fascinating and you give you a real sense of the local music scene.

Radiohead have previous with IVW, your bandmate Colin Greenwood was our first ever ambassador. Has he given you and tips for surviving an IVW week?

You know what we haven’t talked about it, which is very Radiohead! [laughs] At the time he really enjoyed doing the first one as it’s a subject that’s important to him too. So I follow in his footsteps… as in so many other things!

The dates are of Philip’s tour are below, plus here is more details on week and the film. 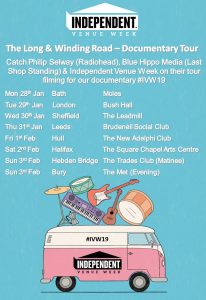