The series’ inaugural episode sees Brooklyn-based artist and songwriter J. Hoard tell the story of the iconic Arlene’s Grocery and The Lesson

For its inaugural episode, Independent Venue Speak invited the Grammy-winning, Brooklyn-based artist and songwriter J. Hoard to tell the tale of the iconic Lower East Side room Arlene’s Grocery and its ties to The Lesson, a world-renowned hip-hop jam ensemble that forged an entire music culture. “To truly make Independent Venue Speak as incredible in execution as it was in concept, we enlisted the artists and venue operators to tell these stories themselves,” says Cecilie Nielsen, Director of Special Projects at Marauder that, along with Independent Venue Speak, produces the annual Independent Venue Week event. “These stories are about extraordinary people who helped inspire prolific music movements and about the venues that offered these movements not just a stage, but a home.”

There might be no better example of the symbiosis between independent venues and the musical communities they support than the story of The Lesson and Arlene’s Grocery. “What’s dope about The Lesson is that a lot of us were the people that nobody wanted to give a chance,” explains J. Hoard. “So, we all took a chance on each other. Arlene’s took a chance on us…Arlene’s gave all of us the nutrients and the platform to do amazing things. What The Lesson did was literally ahead of its time.”

The podcast launch comes just over one month shy of this year’s Independent Venue Week celebration. Scheduled to occur from July 12 – July 18, this year’s celebration of the spirit of independence is poised to be the largest yet, with over 200 venues from across 41 states and territories already confirmed to participate.

Episode 1: Arlene’s Grocery and The Lesson

Thursdays at Arlene’s Grocery were once famous around the globe. The Lesson attracted world-class talent from Kimbra to Corey Henry, becoming a paragon of inclusivity across musicians in NYC. The Lesson not only brought a community of musicians to life like no other session in the city, but also created a magnetic environment for a legion of dedicated fans. Hosted by The Lesson mainstay J. Hoard, this episode will delve into how The Lesson and Arlene’s Grocery helped grow a community of live hip-hop musicians into a culture of its own.

“J. Hoard, an exuberantly gifted young vocalist and songwriter who treats affirmation as an art form, has lately been leaving bread crumbs all over the New York City scene” – The New York Times

J. Hoard is a Brooklyn-based artist. His original compositions and arrangements easily shift genre to articulate his vivid songwriting. This eclecticism has yielded collaborations with artists such as Black Coffee, Chance the Rapper, Brasstracks, and hip-hop royalty Jean Grae & Quelle Chris. Additionally, he has worked closely with a host of jazz/experimental artists such as Sonnymoon, Javier Santiago, Jose James, TheLessonGK, and music legend Meshell Ndegeocello.

Formerly a bodega, Arlene’s Grocery opened its doors in 1995 as one of the first live music clubs in the Lower East Side. Up-and-coming bands flocked to the now iconic space for the sonic beauty and intimacy of the powerful sounding +100 capacity room. After expanding into the next-door butcher shop in the late 90’s, Arlene’s now offers two fully stocked bars and a gallery space for artists in addition to its large helping of live music. As a handful of live music clubs pop up (and down) in the neighborhood, Arlene’s still holds true to its intention of nurturing unsigned talent, providing a great experience for fans, and remaining an institution in the New York City music scene. 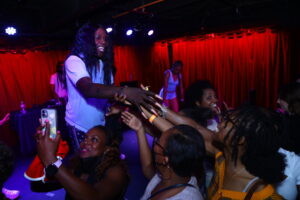 Cellar on Treadwell / Madrone Art Bar There are so many shows to see today, including Killer Queen at Freeman Arts Pavilion, Rock of 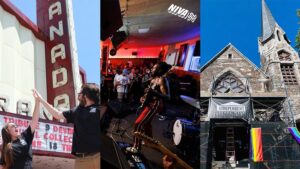