Widening our peripheries: A Conversation about empathy with Nadine Shah

Joining us this year as one of five Independent Venue Week ambassadors, we have South Tyneside’s Nadine Shah. Journalist Joe Zadeh went down to interview her.

Words and interview by Joe Zadeh

As our newspaper front pages continue to emit endless echoes of Brexit rumours, North Korean nuke tests, Donald Trump’s ongoing existence, and rich people avoiding tax, it’s become easy to forget we are living through the worst humanitarian crisis of our time. Since the beginning of the war in Syria, over 11 million people have fled for their lives, often to countries where they are demonised by the press and refused entry altogether.

Newcastle artist Nadine Shah has never shied away from tackling hard-to-swallow issues. Her debut album, Love Your Dum and Mad, lyrically explored her experiences with two recent suicides amongst her close friends, and numerous songs on 2015’s Fast Food addressed her mental health struggles with panic attacks and night terrors. But when it came to writing album number three, she was inspired to widen her peripheral imagination even further to the daily horrors of people living through the refugee crisis.

The idea came when her brother, Karim Shah, (a documentary maker) asked her to score the music for a film he was making about the children of a refugee camp on the Turkey/Syria border. “I was looking at what my brother was doing, and thinking about how he made a difference with the work he does,” says Nadine. “I decided I wanted to do that with music. I wanted to tell other people’s stories, because at the time they weren’t being told.”

As the writing of the album progressed, her mind’s eye began to focus not only on the refugee crisis, but also the general rise of nationalism across the West, waves of Islamophobia, and alarming lack of empathy that seemed to be sweeping through society. The result is Holiday Destination, a vibrant yet savage collection of post-punk songs that makes you want to get up and do something, anything.

Now, as Nadine comes onboard as a curator for 2018’s Independent Venue Week, we caught up with her to chat about national identity, the power of empathy, and her own experiences on Britain’s independent venue circuit. 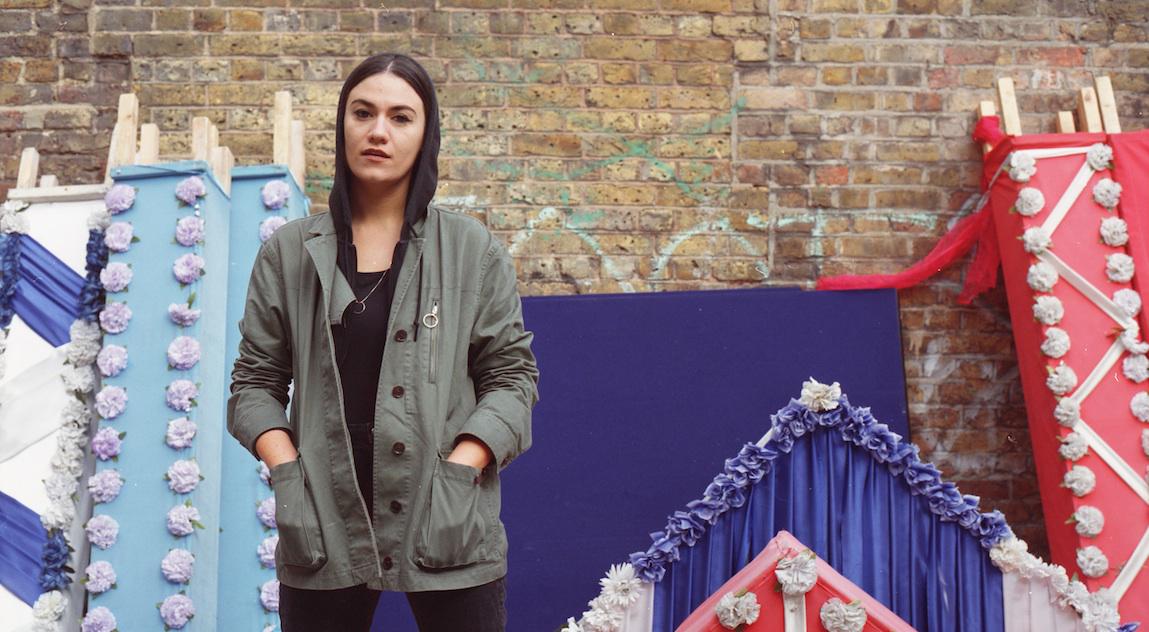 Hi Nadine! What made you want to get involved in IVW?

I heard about it loads via BBC 6Music, and it just sounded like a great idea. I like that IVW is celebrating small independent venues, and doesn’t get too militant about telling people what they need to do to save them. It’s about having a good time in these places rather than just rallying for support.

How important were independent venues to you when you were coming through?

They were the only venues I could play starting out. They just have so much more character. On my most recent tour I played somewhere I’d never been before: Brudenell Social Club in Leeds. A guy called Nathan runs it and he gets massive bands in. Shows there are always unforgettable, and the venue really appreciates the artists, so in turn artists want to play there. There’s a dog there too, which is brilliant.

If I was to ask for your oddest experience at a live show, what springs to mind?

One night a man in my audience really liked a particular song and decided to get up on stage and start singing it with me, uninvited. Back in those days it was just me and a piano, and I couldn’t really abandon it to shove him offstage, so I had to keep going. He kept trying to take my mic and there was nothing I could really do. He had a shite voice too.

You’ve curated a tour for this year’s IVW. Tell me how that came together.

It’s something Independent Venue Week offered me as a chance to do. The idea is to shine a light on some of the music and performers I love, who are currently out there playing. I’ll also be playing a couple of the dates.

Which acts have you picked?

That’s still under wraps for now, but I’ll be able to say more very soon. All I can say is that you’ll love them.

Sonically, it’s the least dour album we’ve made. I didn’t want people to hear it and feel down in the dumps. I wanted people to feel energetic and instilled with hope. I also wanted it to be a more commercial album, so that more people could access it if I wanted to spread this message further.

I think people don’t want to be preached to. Some artists do that, and do it well, like Billy Bragg. But I’m not as well-versed politically as those artists, and I don’t want to be a political artist. So, I was looking in different places for reference, like Stevie Wonder. His songs, like “Living for the City” and “Higher Ground”, are hugely political, but on first or second listen you never realise that.

Tell me about the messages in your album.

Well, I was predominantly writing about the refugee crisis, but then 2016 was such a shit tip that I ended up writing loosely about Trump’s inauguration and the state of affairs in UK politics aswell, especially the rise in nationalism. My family is Pakistani, and this wave of nationalism really hit them hard. All of a sudden we were hearing things like, “Go back to where you come from.”

How big a part of your identity is your Pakistani heritage, and do you visit much?

No, it’s pretty shit for me over there. I don’t speak fluent Urdu, and it’s a volatile country at the moment. The political state of affairs isn’t great, and there are a lot of human rights issues I’m not particularly comfortable with. As a woman, it’s difficult for me to just walk around the city by myself. But there is a really beautiful side to Pakistan that lots of people don’t see or hear about. The music and culture are gorgeous.

How does it feel to perform such politicised and emotionally invested music to a live audience?

I think the nature of most of my music is always quite intense, but this one is much more upbeat. I’m dancing onstage all of a sudden. It’s a more visceral performance than the last two albums, and it’s something my existing audience were definitely a bit shocked by. I get into the crowd a lot now, because I’m really trying to rally people. There are a lot of people coming to the shows who are usually into punk, and there’s some punk bands who have been endorsing the new performances. I didn’t expect that, but I like it.

How do people react to your new live approach?

Well, I used to be very solemn and teary onstage, but now I’m trying to make people move. Some songs are just pure anger, like “Out the Way”. My band told me that every night I start shouting at the audience, “Come on! Fucking move!” I had no idea, I was so in the moment.

What’s that song about?

Well the first lyric is: “Where would you have me go? I’m second generation, don’t you know.” It’s a direct response to this rise in nationalism, and especially the saying “Go back to where you come from.” So it was my personal reaction to that, and the reaction of my family, who are much darker skinned than I am. They receive verbal abuse in the streets. Not just that, it’s also a response to what I see as a lack of empathy towards people who are fleeing a country where there is a war going on.

There does seem to be a clinical lack of empathy in Britain right now.

It’s bizarre because a country like England is an island of immigrants. We are comprised of immigrants. There is no such thing as indigenous English, ask any historian. My mother’s family are from Norway. The Norwegians came in via Scotland and the North of England. As geordies, even some of our language comes from that. Instead of saying “I’m going home” in Newcastle, we say “I’m gan yem”, which is Norwegian for “going home.” There are loads of things like that, because we are an island that has constantly had people coming in and out of it. That’s why I find it hilarious when people say go back to where you come from – as if there is one pure race? There isn’t. It’s daft!

PrevPreviousThe Importance of Staying Curious: A Conversation with Portishead’s Adrian Utley
NextWe are looking for volunteers for #IVW18Next