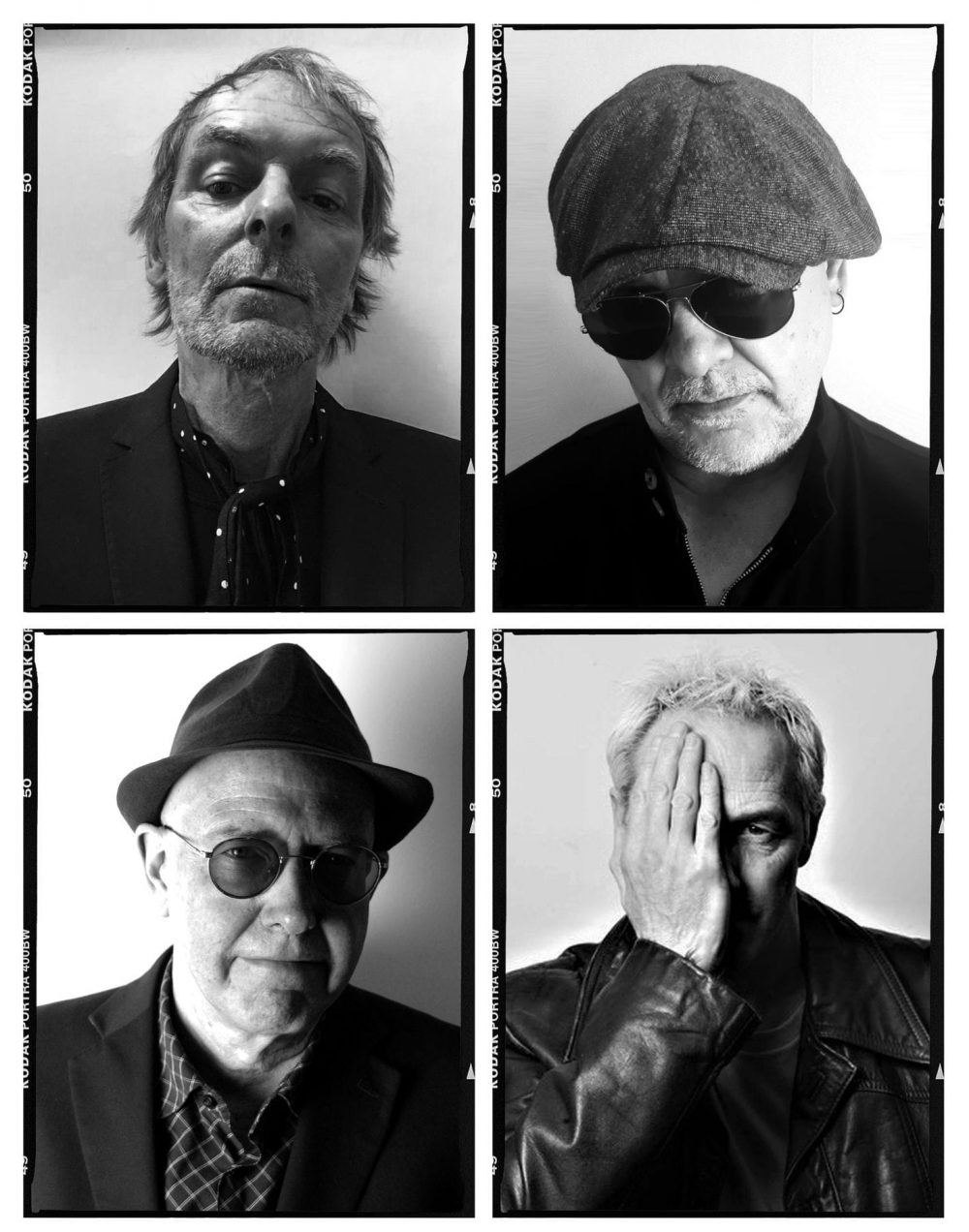 Baz Warne (Stranglers-Vocals and Guitar), Paul Gray (The Damned-Bass), Leigh Haggarty-(Ruts DC-Guitar), Marty Love (Johnny Moped-Drums). We live in an era of lockdown-crafted, post-pandemic albums. With live performance taken out of the equation, in that dark period between 2020 and late 2021, musicians had to get creative. And get creative they did. Stripped of the ability to perform with their respective bands, Baz Warne (The Stranglers), Paul Gray (The Damned), Leigh Heggarty (Ruts DC) and Marty Love (Johnny Moped) joined together digitally and formed Wingmen; a musical union that somehow manages to sound like the sum of all of those legendary bands, yet also nothing like them. Say hello to Wingmen, a band formed in extraordinary circumstances. Due to be released January 27th via Cadiz Music, it’s important to stress that at no point during the recording of this debut Wingmen album were the musicians ever in the same room playing together. And they still haven’t. This music has formed, as so much did in those explosive first waves of punk that these musicians were born from, out of boredom. To stop from going stir-crazy during lockdown. And the results were instantly rewarding. “I called Paul and suggested to him that we should have a go at a new project after enjoying working together on The Sensible Gray Cells record and if so, did he have anyone in mind,” explains drummer Marty on how Wingmen came to be. “And we both wanted to work with Leigh, and he was interested in the idea. I asked Leigh if he knew any vocalists that may fancy it and he said Baz Warne could be worth a call, and to my surprise, Baz said yes! So, then there were four. We all started sending song ideas to each other. The first was ‘Brits’ from Baz and then ‘Starting Blocks’ from Leigh. After that, the songs just kept coming…” The proof of this is clear to hear in the ten songs that complete the project. The album is chock full of dynamic songwriting and performances, overflowing with ideas and inspiration. You can clearly hear the styles and identities of each individual performer in the music, and the influences of their individual bands, but somehow, despite having never played in the same room together, Wingmen sounds like a band. Bassist Paul Gray continues… “Although we’d recorded various parts at our homes for our respective bands before, none of us had employed this process to make a complete album! Only Marty and I had worked together before, so it was a complete leap into the unknown. We all had loads of ideas to throw into the pot – some songs arrived completely fully formed that we simply added our own parts to, and others were more akin to musical sketches that ended up as co-writes. The album is a true collaboration inasmuch as none of us knew what parts or melodies or lyrics might be added by anyone else – it was an immensely exciting process! No rehearsals, no pre-production, just us winging ideas to and fro, with the drums going on last of all in the studio – which is completely the opposite of how things are usually done, of course.” Today, we get to sample the first taste of Wingmen’s work in ‘Down In The Hole’, a song which channels the intense moods and feelings that lockdown created. “This album may well have never come about were it not for the fact that our lives were suddenly put on hold,” explains Paul. “Some of us felt the effects of the enforced isolation from friends and loved ones that followed – and wondering when the hell it was all gonna end – more keenly than others. ‘Down in the Hole’ is a nod to them, and those that live with the effects of depression to a greater or lesser degree on a daily basis. Not a particularly jolly subject I know, but the music suggested a fairly dark lyric and the song just kinda ended up writing itself”. Although unconventional in its creation, the good news is that Wingmen is not just a studio project and will be a band that plays live. Dates are currently being booked and who knows what else the future holds for Wingmen. For now, we’ll leave the final words to guitarist extraordinaire Leigh Heggarty… “If someone had told my teenage self that I’d know members of The Stranglers, The Damned, Eddie & the Hot Rods, Johnny Moped and for that matter The Ruts – let alone that one day I would be in a band with them – I’d have probably told them that they were mad. It’s worth having a dream sometimes.”