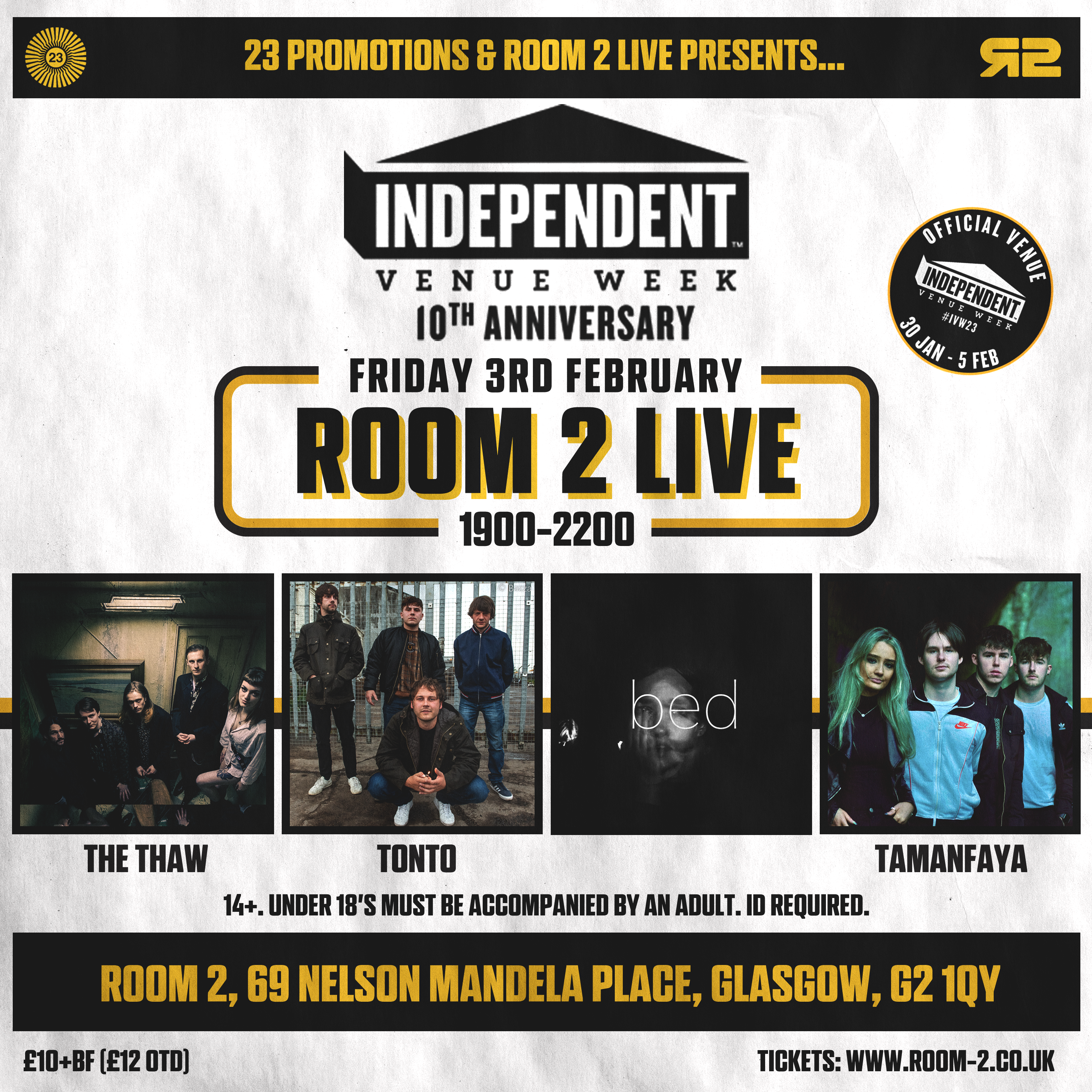 The Thaw, Bed, Tonto and Tamanfaya

23 Promotions & Room 2 Live Presents… Independent Venue Week 2023 with The Thaw, Bed, Tonto & Tamanfay in Room 2 Live, Glasgow. ‘Independent Venue Week celebrates the spirit of independence and culture of live music and venues. The one week all of the independently spirited venues come together with artists, tastemakers, and media to celebrate the art of live music. We can’t wait to celebrate #10YearsofIVW in 2023 and write the new chapter with all the amazing independent venues around the UK.’ Please select the ticket option for the act you are primarily buying your ticket to support. £10+BF in advance. £12 on the door. 14+. Under 18’s must be accompanied by an adult. ID required (Young Scot card, driving licence (full or provisional), passport or birth certificate). THE THAW: ‘An alternative rock band, hailed as ‘Spellbound headbangers’ by Edinburgh’s Sneaky Pete’s. Formed in late 2021, the band are instrumentally influenced by Radiohead, Foo Fighters, Massive Attack and fellow Scottish group Biffy Clyro, while frontwoman Lauren brings a touch of Jeff Buckley and Liz Fraser to her vocal performance. The band work collaboratively to produce dynamic music with a mix of catchy, danceable tracks with others being more soulful and ambient.’ TONTO: ‘It’s time for Rock N’ Roll to get bad and boozy! If infectious riffs and catchy tunes to sing your heart out to is your thing then TONTO is the new band you’re ears have been craving. TONTO’s tunes are live anthems for the masses and whilst Covid has tore everyone a new one the band are like dogs in heat waiting to explode on a stage and get the chants going. TONTO the band released their debut single ‘Down The Hatch’ along with ‘Insider.’ The lads have new music planned for 2022.’ BED: ‘A strange, new rock band from Glasgow. The male-female lead duo sing and dance between despair and delight to music fit for an asylum. All with the intent to sound like nothing you have ever heard. Behold. Bed.’ TAMANFAYA: ‘Matt Philp and Aidan O’Hara started Tamanfaya when they were 15 years old in 2018. In November 2021, Danny O’Hara re-joined the band as the bass guitarist and Lois Duncan joined as the lead singer. Their sound is essentially a rock sound with searing guitar riffs and punchy vocals. They are technically great musicians who know the way around their instruments and are a must see live band.’ Thank you for the support and see you there! ??23 Promotions.