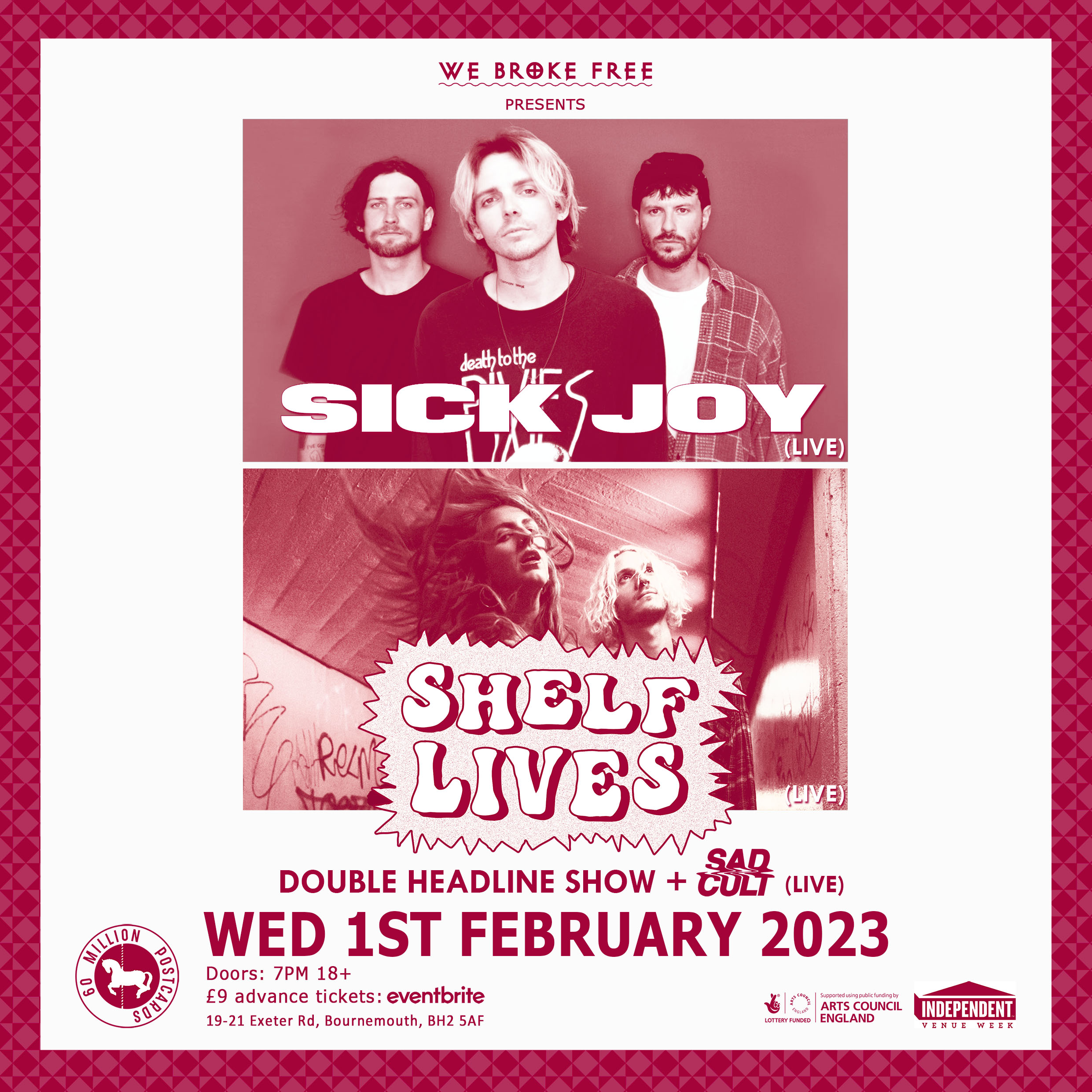 We Broke Free & Independent Venue Week present: Sick Joy + Shelf Lives (Double Headliner) + Sad Cult 60 Million Postcards, Bournemouth 18+ £9 – https://bit.ly/SJ-SL-60MPC SICK JOY Cutting together malign heaviness with acidic melody then tying into place with the reigns of contagious pop. Sick Joy’s ‘noise-pop’ blood is dirtied with echoes of Pixies and Nirvana among many others. Although birthed in Newcastle, Sick Joy moved south to Brighton in September 2016 and played their first show to a sold out Patterns with fellow north-to-south Brighton bands Demob Happy and Tigercub. Debut single April 2017 ‘Stars’ – 3000+ Spotify hits, Championed by Nick Roberts at BBC Introducing and John Kennedy’s ‘Exposure Hot One’ The follow up three months later, ‘Cat In A Bird Cage’ – 2000+ Spotify Hits, 12000+ video views# SHELF LIVES Though Shelf Lives has only been a band since 2021, they’ve already played acclaimed sets at Glastonbury, supported Skunk Anansie on a full EU/UK tour, and joined fellow confrontational noise-makers Bob Vylan and HO99O9 on the cover of Gigwise. In April 2022 they released their first mini-album Yes, offence – a danceable outburst of dissonant guitar riffs, jackhammer beats and black comedic lyrics they’ve described as “a reflection of a broken society verging on the edge of cultureless, all while wearing a party hat.” Societal extremes – whether it’s wealth, poverty, pop culture or patriotism – are captured not through heart on sleeve lyrics, but in the extremes of their sound. Kicking the whole thing off, Sabrina announces – in the style of a Real Housewife by way of Veronica Sawyer – “If I give you a Chanel necklace and you choke on it, that’s your problem not mine. ?? TICKETS: https://bit.ly/SJ-SL-60MPC