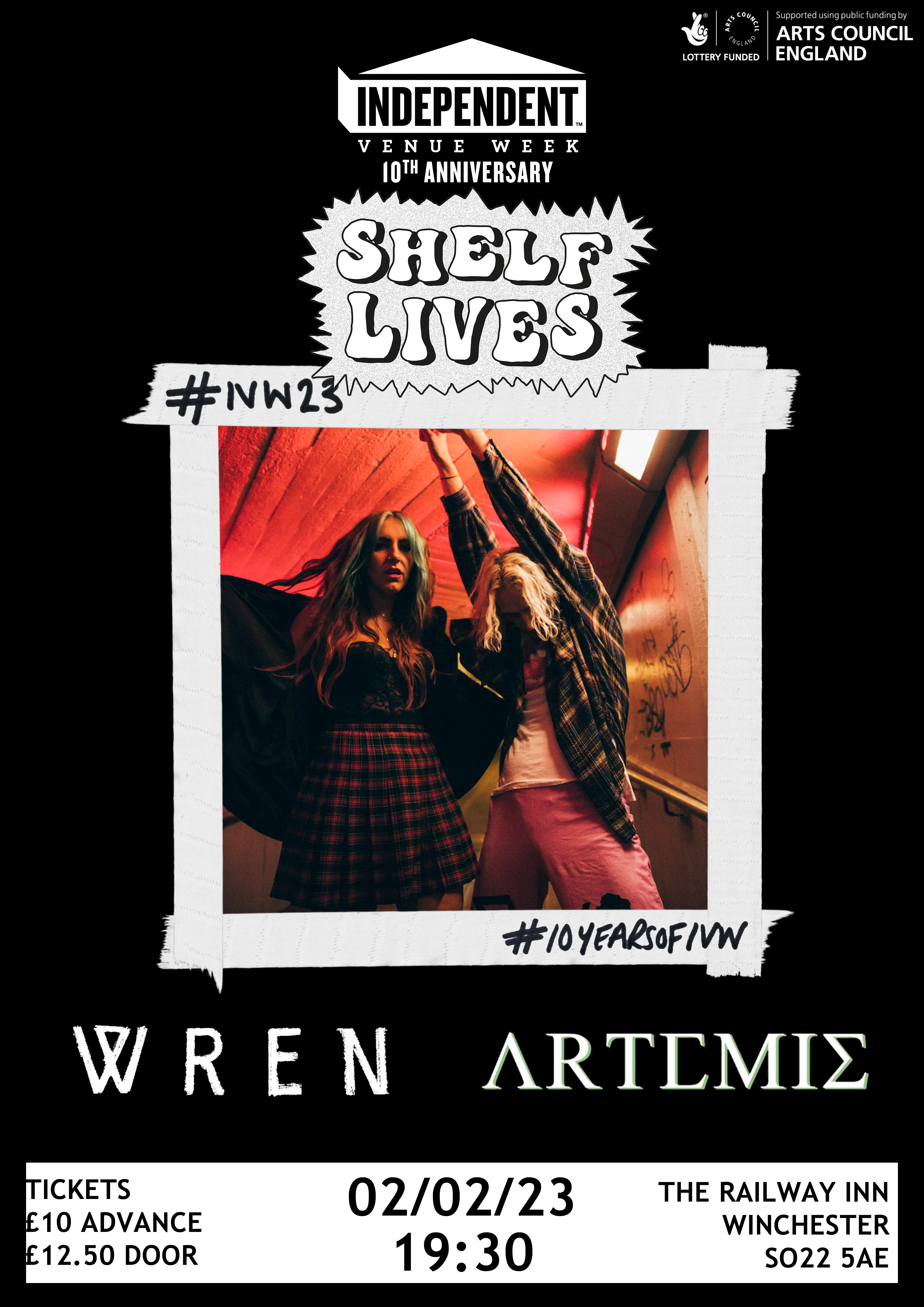 SUPPORT FROM WREN & ARTEMIS “Echoes of the attitude of artists such as Peaches and Bikini Kill. Fueled with anger and dissatisfaction” – Joyzine “It’s as close to real life as you can get without feeling really depressed about it,” Sabrina (originating from Toronto) offers by way of summarising Shelf Lives – the London-based electro-punk outfit she fronts alongside guitarist/producer Jonny. Much like this point in time, the duo’s music feels chaotic, tense, and wired. Pairing hardcore punk’s brief blasts of energy with electroclash’s minimal and sleazy sonics, they raise themes of societal collapse and hyper-consumerism with a warped smile. The result taps into headspace that’s as rotten as it is dopamine-flooded, with pent-up frustration and pop hooks tossed together in a way that makes, in their own words, “the fucked up seem fun.” Though Shelf Lives has only been a band since 2021, they’ve already played acclaimed sets at Glastonbury, supported Skunk Anansie on a full EU/UK tour, were ‘ones to watch in 2022’ and joined fellow confrontational noise-makers Bob Vylan and HO99O9 on the cover of Gigwise. In April 2022, they released their first mini-album Yes, offence – a danceable outburst of dissonant guitar riffs, jackhammer beats and black comedic lyrics they’ve described as “a reflection of a broken society verging on the edge of cultureless, all while wearing a party hat.” Societal extremes – whether it’s wealth, poverty, pop culture or patriotism – are captured not through heart-on-sleeve lyrics, but in the extremes of their sound. Kicking the whole thing off, Sabrina announces – in the style of a Real Housewife by way of Veronica Sawyer – “If I give you a Chanel necklace and you choke on it, that’s your problem not mine.” On the face of it, Shelf Lives make catchy, energetic pop songs that bring the abrasiveness and physicality of punk back to a small, cramped house party setting. It’s music so rowdy you can practically feel the sweat on the ceiling and the sound of crushed cans under your feet. “I think what you’re gonna get from us will be different every time, but it won’t sound like a different band,” says Johnny. “As long as it’s authentic and fun,” Sabrina adds, “Cool – we’re there.” Check out their music here! Joining Shelf Lives is WREN. Hailing from the South Coast of England, WREN blends velvet vocals, hypnotic bass lines and sweeping guitars to submerge you into the electronic undergrowth. As a one-womxn DIY-run project, WREN is set to dominate in 2023, ready to release two EP projects this year. Live performances include sold-out shows in hometown Southampton and Festivals such as Carfest South, Victorious, Bestival and Lamertree. Wander into the WREN experience… In WREN’S words, “Join the collective – Feel empowered, be authentic, but most of all, be kind.” And if you couldn’t get enough punk, Southampton-based four-piece riot grrrl alt-punk band Artemis will be hitting the stage. Amongst the ranging punk quartet lie the powerful and seducing lead vocals of Yianna Schultze, vibing with the rockin’ riffs from guitarist Frankie Linton, in addition to the catchy and punchy basslines of HanAbecassis, which lock with the insanely sick drummer Fenella Saunders. Consistently providing bangin’ tunes for adrenaline-seeking giggers, Artemis has supported Riot Grrrl legends Dream Nails and Destroy Boys and chaotic punk boys False Heads. They recently played their first gig abroad in Copenhagen, Denmark, for Vesterbro Rock Fest and are actively gigging within Southampton, London, Winchester and Portsmouth. The band is at home in a live setting tearing the roof down off venues and always setting the bar for top-notch and unforgettable energy. Check out their music here! This show is part of Independent Venue Week (IVW), taking place between 30th January to 5th February 2023. IVW is the UK’s annual 7-day celebration of independent music & arts venues and those that own, run and work in them. This year, IVW will be celebrating their 10th anniversary! Head to the IVW website for event listings of all participating venues announced for the week. #IVW23 #10YearsofIVW