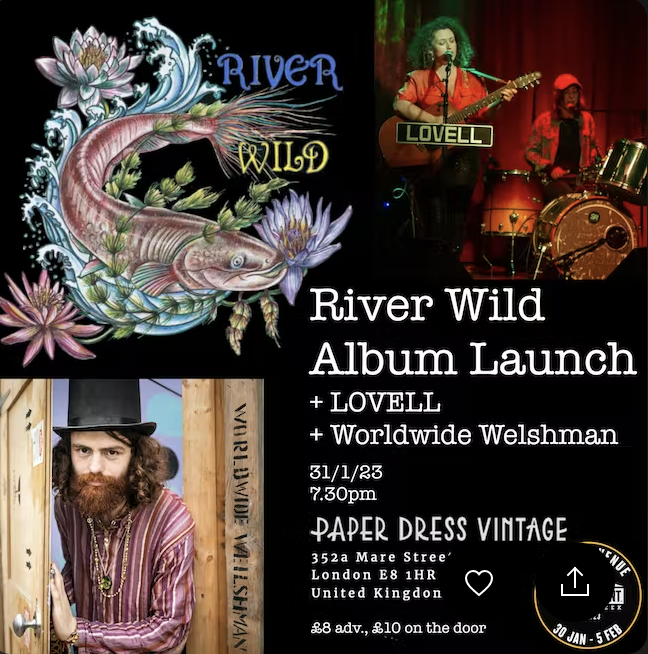 Join us on Tuesday 31 Janaury for a very special Independent Venue Week show at Paper Dress Vintage as River Wild launch their new album alongside support from LOVELL and Worldwide Welshman. RIVER WILD is the latest incarnation of singer songwriter Ffion Aynsley. With her powerful and balmy vocals, Ffion’s captivating story-telling will be accompanied by a dynamic 5 piece band including lush vocal harmonies, violin, banjo, bass, drums and synth. Her debut album as River Wild draws inspiration from Welsh & Spanish folk music with hints of psychedelic rock. It is a collection of songs, poetry and stories she has heard, lived and imagined; characters she has met along the way. It was conceived on a little blue boat travelling up and down the Lea and now you are invited to get on board! LOVELL ‘Minimalist lo-fi punk vibe with cool acoustic grooves and witty but weird songs about sleazy dreams and domestic chores. Hints of Violent Femmes and The Roches but Lovell are unique and brilliant.’ Lovell are a lo-fi alt-pop grunge punk-folk duo based in North London. Lovell consists of singer-songwriter Hannah Lovell on vocals and guitar, with Kid Kirby on drums, vocals and clarinet. WORLDWIDE WELSHMAN Worldwide Welshman (Liam Rickard) is a pan-global-alt-pop artist based in Machynlleth performing tragi-comic singalongs, multi-lingual party bangers and funk-rock-jazzed up Welsh folk. For this gig in Paper Dress Vintage, Liam will be joined by his London band to perform a mixture of crowd favourites and new material. ‘WWW is so funny, I loved it’ – Jo Jones