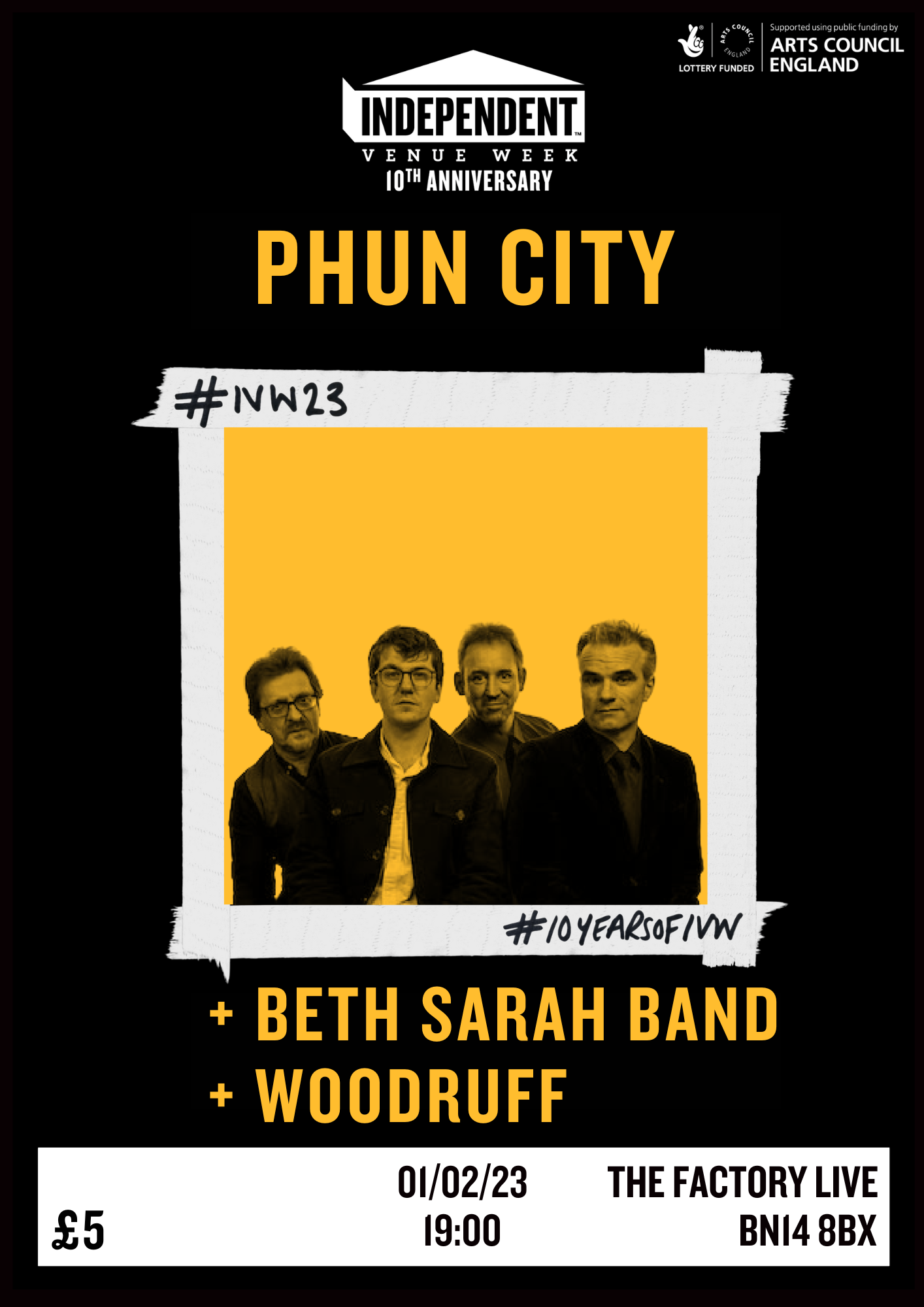 INDEPENDENT VENUE WEEK: PHUN CITY / BETH SARAH BAND / WOODRUFF A BESPOKE LINE UP AS PART OF INDEPENDENT VENUE WEEK Independent Venue Week is the UK’s annual 7-day celebration of independent music and arts venues. Come on down to The Factory Live for one of our bespoke gigs between Wednesday 1 to Saturday 4 February 2023 to see some amazing original regional artists perform and support live music – for just £5 per night! PHUN CITY ‘Power Pop New Wave Art Rock from the Sussex Seaside’ PHUN CITY are a 4 piece originals band from Worthing, West Sussex, formed in 2019, launched their debut EP in March 2020. Their new Album on the first of February 2023, at a joint launch party with the Beth Sarah band at the Factory in Worthing! They are made up of Paul Sullivan, Phil Lincoln, Beth Sarah and Rupert Latimer (also of Social Skills ) BETH SARAH AND HER BAND Beth Sarah is a singer/songwriter from the South Coast of the UK. Beth has played at a variety of festivals, from small-scale local Freewheelin Feastival events to larger ticketed events such as Pub in the Park. She also sings with the band Phun City and as part of the duo BB Jukebox. Singer-songwriter Beth Sarah brings a positive, uplifting experience through her performances and recordings of her original melodies and lyrics. Her tracks evoke the nostalgia of 90s indie with driving acoustic guitar and keyboards that create an anthemic sound. She first appeared on the published music scene in 2020 as a solo songwriter producer with the track ROLLERSKATES which received local radio play. She has since formed a full band with the forthcoming album LET HER GO emulating a live sound. Beth can still be found playing solo or as a duo at times. “The fresh sounding voice of Beth Sarah you had no idea you needed in your life until you catch the first notes of track 1 & you’re in, hooked, propelled, taken. Original, thought provoking & moving ta boot, she can sway your emotions with a turn of phrase, the twist of a rhyme, the off beat of an intro. Above all else, her charm, wit, radiance & warmth ooze from every line of every song, every pore of her being – she truly is the genuine article and a fine discovery for 2022” – The Pete Jones Show. Radio Reverb Line Up Beth Sarah – Acoustic guitar and vocals / James Howard – Keys / Dom Pallat – Bass / Dom Myers – Drums WOODRUFF Woodruff are a four-piece original band from Bognor Regis.