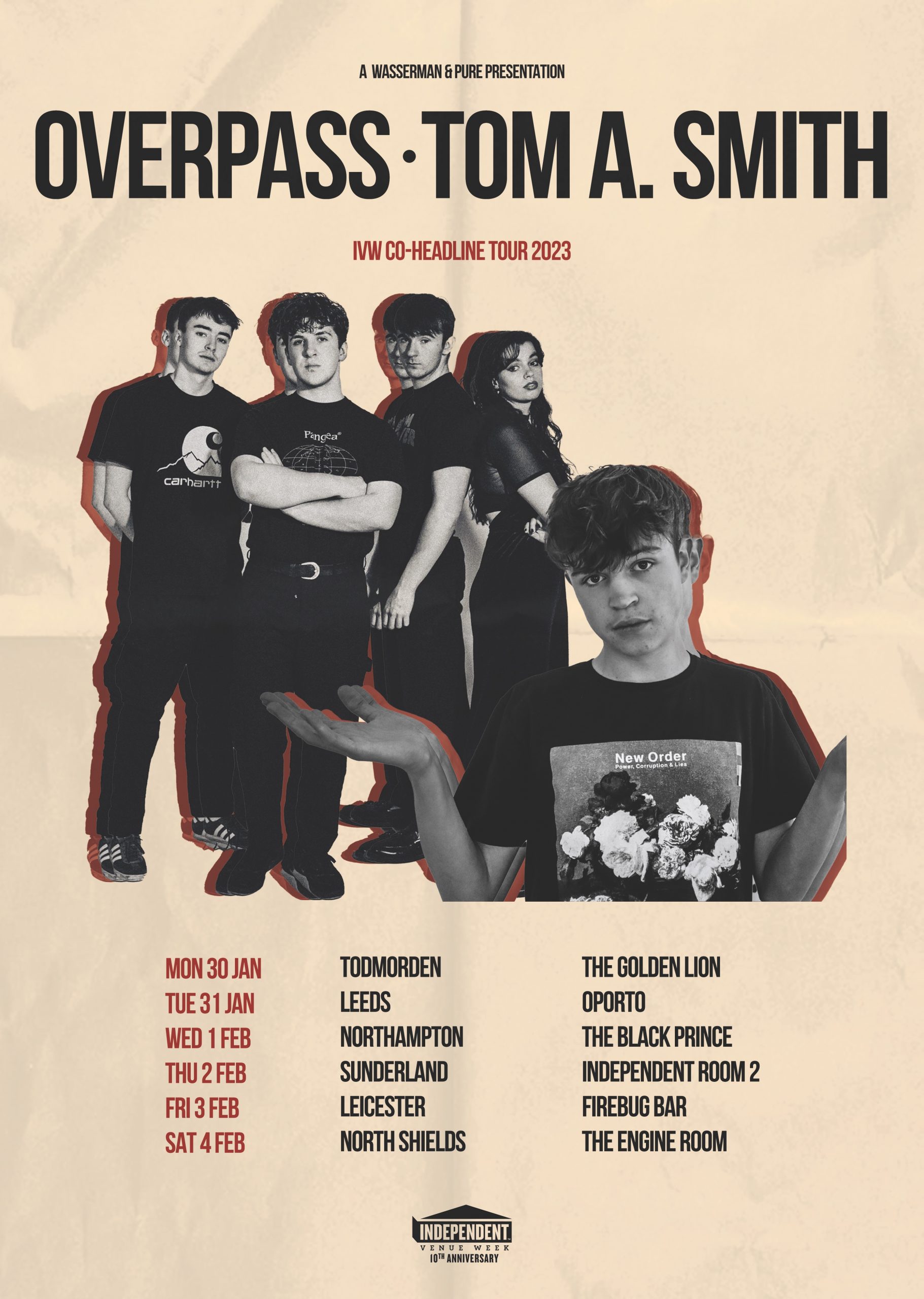 OVERPASS Overpass have quickly established themselves as Birmingham’s newest hometown heroes, boasting two nights at The Sunflower Lounge and O2 Institute2 on their ever-growing list of sold-out dates. Major support slots alongside the likes of The Wombats, The Snuts and The Twang, have boosted their profile, alongside airplay at BBC Introducing, Radio X and Amazing Radio. Formed in 2020, friends Max Newbold, Elliot Rawlings, India Armstrong and Joe Gallagher felt compelled to express their creativity post-lockdown. Their shared love of indie-rock led to the band’s self-released debut single, ‘One Night Lover’. They have since picked up wide-ranging streaming playlist support on their subsequent singles, most recently ‘On Your Own’. Following a busy summer of festivals, including appearances at Isle of Wight, Truck and Y-Not?, Overpass are ready to release their most ambitious material to date and cement their place as one the UK’s most exciting new bands. TOM A SMITH Despite still being a teenager, Sunderland-based newcomer Tom A. Smith has already achieved more than most artists do in a lifetime. He played his first ever gig aged just eight, supporting local psychedelic rockers Detroit Social Club at legendary Newcastle venue The Cluny, performed at Glastonbury before he was even in secondary school, and Tim Burgess handpicked him to play his stage at Kendal Calling, making him the festival’s youngest ever performer. He has played live with local hero Sam Fender and Catfish & The Bottlemen, as well as supported other Northern acts on the rise like The Lathums and The Mysterines. Tom A. Smith’s self-uploaded performances have won him fans amongst rock and roll royalty. The week David Bowie passed, Bowie’s widow Iman shared Smith’s cover of Bowie’s Lazarus online, commenting on the emotional impact of Smith’s rendition. Blossoms recognised him from one of his videos as he was watching them from the crowd and invited him backstage, while Morrissey – not a man known to lavish praise or endorsements on others – played Smith’s cover of Please Please Please Let Me Get What I Want as his walk on music on a recent US tour. Nile Rogers, James frontman Tim Booth, indie legends The Coral, and many more besides have shared footage of his performances across the globe. “It’s never normal. Every single time it happens it’s surreal,” reflects Smith on the countless pinch-me moments of his career so far. “Music is always what I wanted to do. I just fell in love with it. I asked for guitar lessons when I was four. It’s all I’ve ever known.” Having achieved so much so soon you might think Smith would be content to rest on his laurels a bit. Been there, done that sort of thing; fire up the PS4 and tell your mates about that time you played Glastonbury. All his achievements so far have done though is to stoke Smith’s creative fire and make him want to achieve more as an artist, a performer and a songwriter.