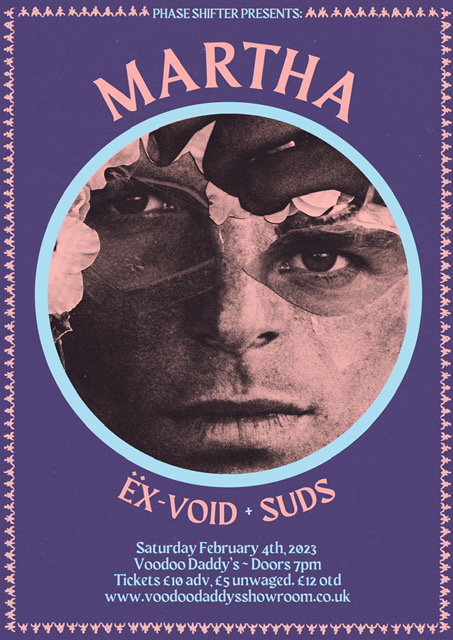 First formed in the small village of Pity Me, Durham, in 2011, Martha released their debut EP the following year on guitarist Jonathan Cairns’ DIY label, Discount Horse. Tours on both sides of the Atlantic soon followed, along with two albums for the UK’s much missed indiepop stable Fortuna Pop: 2014’s Courting Strong (also released in the United States by Salinas Records) and 2016’s sophomore effort Blisters In The Pit of My Heart (via Dirtnap Records in the US). In the meantime, the band became figureheads for the UK’s DIY pop scene by balancing their obvious talents with a clear set of ethics – anti-capitalist, first and foremost – and an open-hearted warmth that’s often absent from the foreground of punk rock. ‘Please Don’t Take Me Back’ is a fine addition to Martha’s discography; their most life-affirming yet and a welcome ripple of light at a time when it’s often difficult to see past the darkness. Listen and love: the beat perpetual drives on. Support from Ex-Void and SUDS