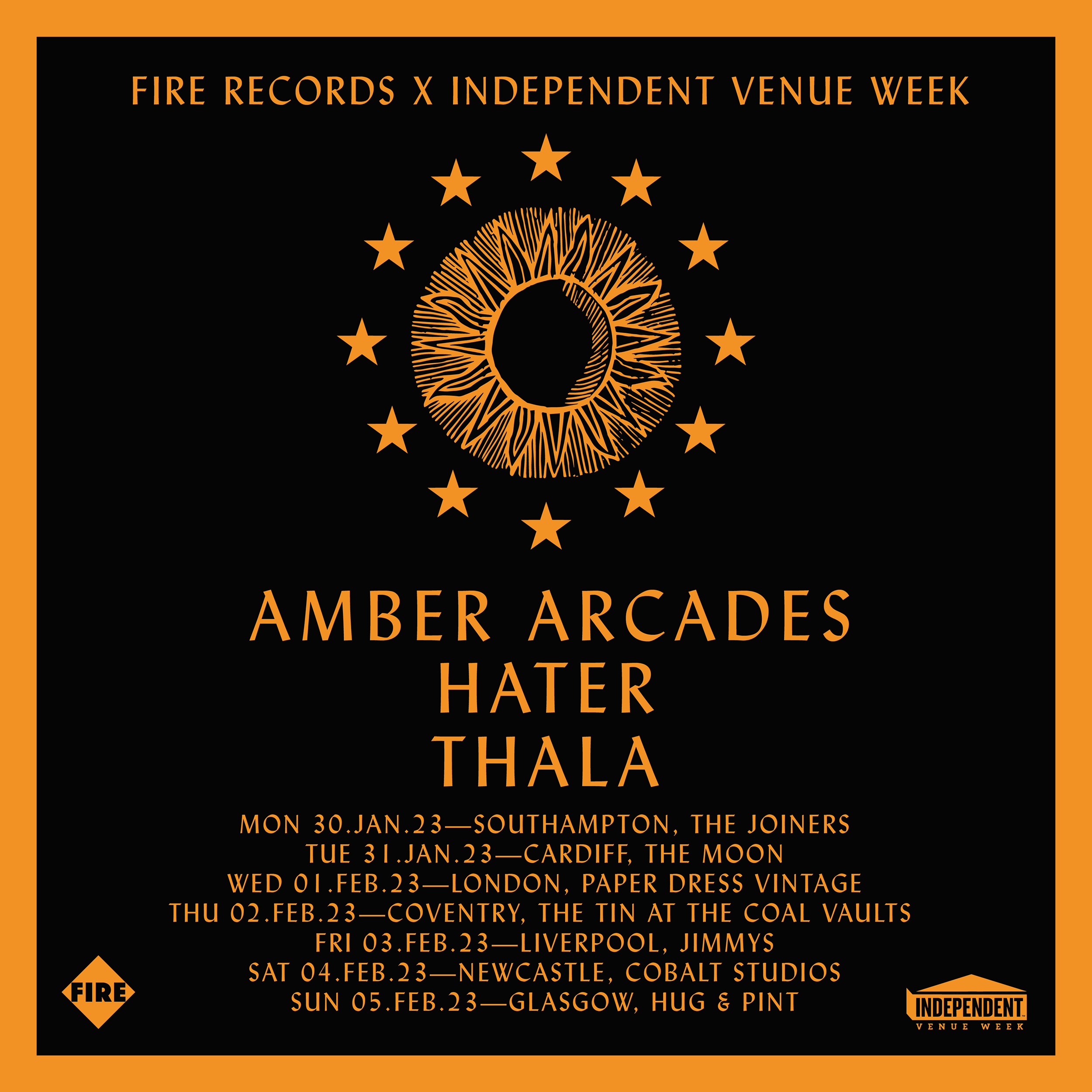 Bringing formidable Fire musicians to this year’s Independent Venue Week, Fire Records joins forces on this travelling independent label showcase of left field and shoegaze pop. This special co-headline tour sees Dutch experimental pop musician Amber Arcades performing music from her new album Barefoot On Diamond Road set for release on 10th February 2022. Characterised by poignant melodies, dreamy vocals and reflective lyrics, Annelotte de Graaf reinvents herself with every album. ‘Wistful, glowing dream pop’ The Guardian One of Sweden’s most exciting young acts, indie-pop quartet Hater will be offering up their infectious riffs and bittersweet shoegaze pop following the release of their acclaimed recent album ‘Sincere’ released earlier this year. Evoking My Bloody Valentine, Slowdive and Deerhunter, their new album is a dazzling piece of aching romanticism destined to feature on a thousand mixtapes. “Few records have cut through the noise of 2022 quite like Hater’s Sincere, achingly cool shoegaze with plenty of heart” Rough Trade – Albums Of The Year Opening the bill is THALA, an emerging songwriter, who over the course of the last two years has constantly reinvented herself with each release while touring with the likes of Snail Mail and Current Joys. In a pool of countless newcomers, she has found the strength to stand out by the means of outstanding song writing and charisma. This intimate tour will see them perform at some of the UK’s best independent venues, including Paper Dress Vintage (London), The Moon (Cardiff), The Tin at the Coal Vaults (Coventry), The Joiners (Southampton), Jimmy’s (Liverpool), Cobalt Studios (Newcastle) and Hug & Pint (Glasgow). Over the past few years Fire Records has risen to become one of the world’s leading labels. Fiercely independent and driven by maverick A&R, it has developed into what Billboard described as “The most elegant Psychedelic Pop label in the World”. The label roster combines the cosmic pop of Jane Weaver, Hater, Islet and Pictish Trail with the haunting ambience of Death And Vanilla, the aural tapestries of Faten Kanaan, the freak-folk mysticality of Brigid Mae Power, the choral ambience of Lucy Gooch and the uncategorizable and universally acclaimed Vanishing Twin. In addition, Fire Records has become a home from home for established international artists such as The Lemonheads, Sebadoh, The Chills, Throwing Muses and The Black Lips. As the label continues to grow, a huge year awaits on the horizon, with music from the likes of new signings Amber Arcades and Decisive Pink (Kate NV and Angel Deradoorian), alongside RVG, Faten Kanaan and Immaterial Possession.