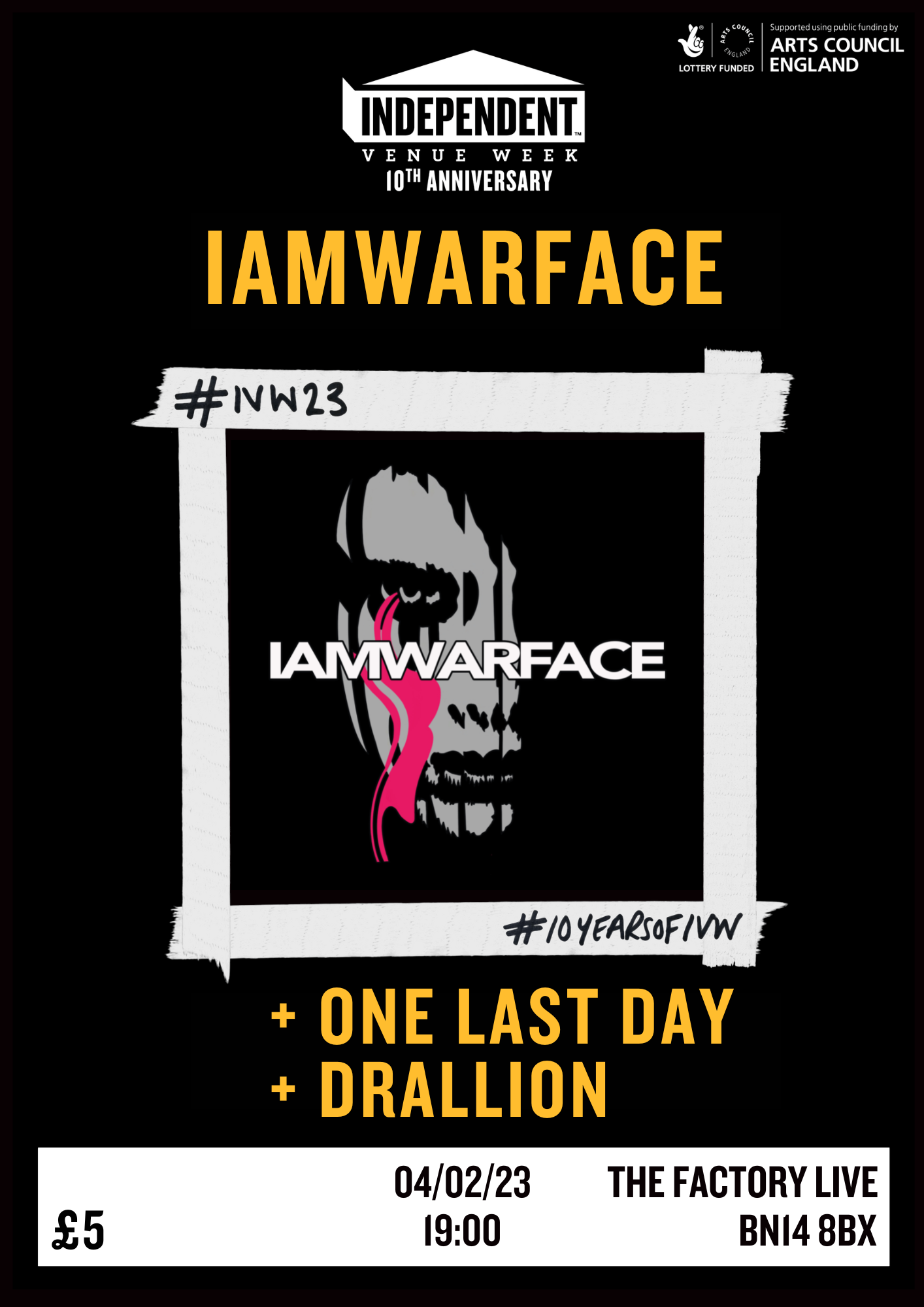 IAMWARFACE + ONE LAST DAY + DRALLION A BESPOKE LINE UP AS PART OF INDEPENDENT VENUE WEEK Independent Venue Week is the UK’s annual 7-day celebration of independent music and arts venues. Come on down to The Factory Live for one of our bespoke gigs between Wednesday 1 to Saturday 4 February 2023 to see some amazing regional artists perform and support live music – for just £5 per night! IAMWARFACE Nu-Rock Band formed in Brighton 2016 by singer/producer Matt Warneford. The name is a cunning metaphor for his own original style of bombastic high-energy groove based electro-rock, which has been affectionaly branded “Rocktronica” by none other than legendary Virgin Radio host Eddy Temple Morris. IAMWARFACE create a new edgier rock sound, echoing the rebellious creativity of the early 90s and punk danger of the 70s. Matt takes the pop route when writing but keeps it dangerous with a fusion of 80’s style vocals, abstract guitars, moody layered synth riffs and pounding drum beats. They sold out support gigs with Gary Numan where they proved so popular to the Numanoids, who called them ‘The best Numan support act in fifteen years’. The Debut Album ‘Year Of The Dragon’ was released in September 2019. ONE LAST DAY A modern hard rock act coming out of the South-East of England. A heavy and emotive band, their musicality is left wide open to a myriad of rock styles all wrapped up into their own distinctive sound. The band are a powerhouse live act, growing a loyal legion of followers at each gig. ONE LAST DAY deliver heavy yet accessible music, combining an eclectic symphony of influences from Hard Rock to Grunge and Metal. This was demonstrated in their debut EP ‘CHAPTER 1: THE END IS THE BEGINNING’ which featured seven gargantuan tracks, including the successful single ‘THIS BOTTLE GOT ME’. From prog stylings to rock ballads, the EP is sure to sate the appetite of those wanting to hear more from this fresh and exciting band. DRALLION Drallion is a 6 piece progressive metal band based in Bournemouth on the south coast of the UK. Their expansive sound includes elements of prog, thrash, industrial and good old classic heavy metal to produce their unique powerhouse approach, together with energetic stage presence and good humour, they are steadily gaining ground with gigs spanning across the south coast and further afield. Their debut album ‘New Machine’ is set for release later this year, with a subsequent UK tour in the making.