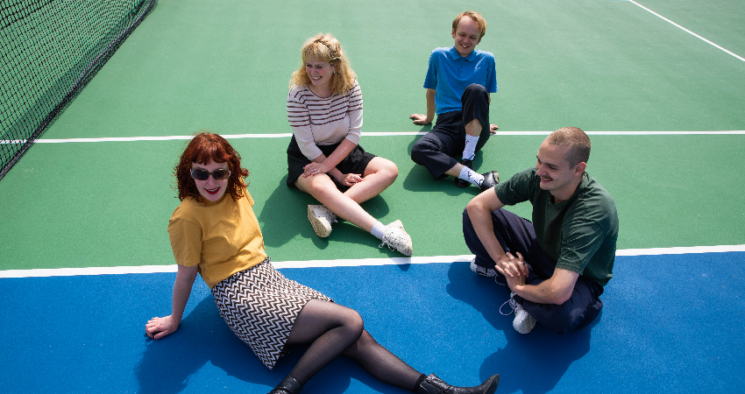 There are approximately a great deal and very many Welcome Breaks scattered throughout the sprawling motorways of the UK. Now, regardless of whether that statement’s true or not; when life become a series of long-stretches and welcomed breaks, it’s to no avail that sometimes all it takes to alleviate spirits is the simplest, of experiential indulgences. Be it the buzz of an overly exhausted tour van, or the green light and smell of sausage rolls in the near Beaconsfield distance; inspiration can be found in the funniest corners of this place we call home; and it’s in the heart of day-to-day simplicities and sprawling services, that we gladly receive Amsterdam’s beamy-grinned, indie-pop powerhouse Pip Blom, back into lives. Following an extensive touring schedule which saw the Dutch 4-piece roam over field, oceans, and Glastonbury’s John Peel stage following the release of their debut record “Boat”, any such cool-cat would be forgiven for wanting to kick back, and indulge in some very appreciated, time off. As is often the way, such timely-abandon cannot be said for Pip Blom however, who immediately began to gather up all her soaked-up inspirations taken from the road, and manifest a re-energised sense of self, and ritualistic songwriting.