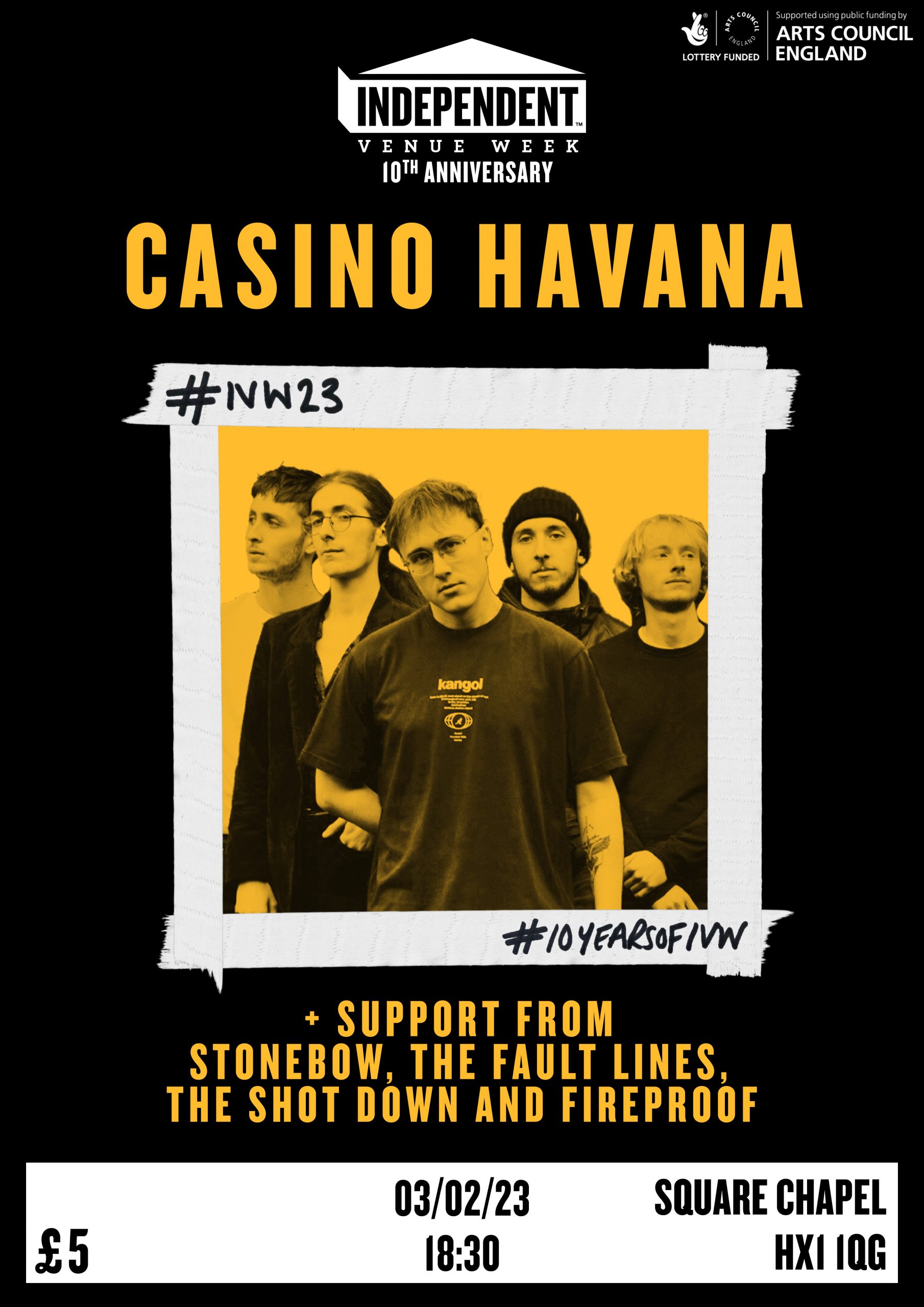 Friday Night Live at Square Chapel – Independent Venue Week Special with Casino Havana, Stonebow, The Fault Lines, The Shot Down and Fireproof. Independent Venue Week is the UK’s annual 7-day celebration of independent music & arts venues and the people that own, run and work in them. In recognition of this we’ve decided to bring an and even bigger Friday Night Live featuring more artists and longer sets showcasing some of the amazing talent who’ve performed so far. Casino Havana – are a 5 piece original rock ‘n’ roll band located in Keighley, West Yorkshire. They play gigs all around Bradford, Huddersfield and Halifax and focus on writing original songs designed around punchy drums, heavy riffs and poetic ‘tell it how it is’ lyrics. You need to see it to believe it! Stonebow – Stonebow are a three-piece who formed at a year’s eve party in the Calder valley. The trio are create predominantly indie bangers. You’ll find hints of rock and anthemic pop in all that they do. Their music is a fusion of modern northern indie rock with roaring guitar sounds straight from the 70s and 80s. Fans of modern alt rock, indie or classic headbangers should find something to enjoy from Stonebow who are quickly making waves in the local music scene. The Fault Lines – Long-time musical partners Louis Sweet and Robbie Freeman along with full support from friends Tom, Pete and Byron come to Square Chapel channelling the stylings of 90’s songwriters such as Elliott Smith mixed with a distinctly modern malaise. Expect incisive lyrics and earworm riffs from this Halifax band. The Shot Down – formed in 2022, The Shot Down bring a unique twist on the desert rock sound by combining British and American inspired sounds with that classic grit found with bands from the North. FireProof – is an alternative indie band from Low Moor, Bradford. With inspirations taken from the indie wave of the early 2000’s FireProof bring that raw energy back. From Mind The Gap to Acting Out, this small group is not afraid of making a racket! Doors 18:30 Fireproof 19:00 – 19:40 Interval 19:40 – 19:50 The Shot Down – 19:50 – 20:30 Interval 20:30 – 20:40 The Fault Lines – 20:40 – 21:20 Interval 21:20 – 21:30 Stonebow 21:30 – 22:10 Interval 22:10 – 22:20 Casino Havana 22:20 – 23:00