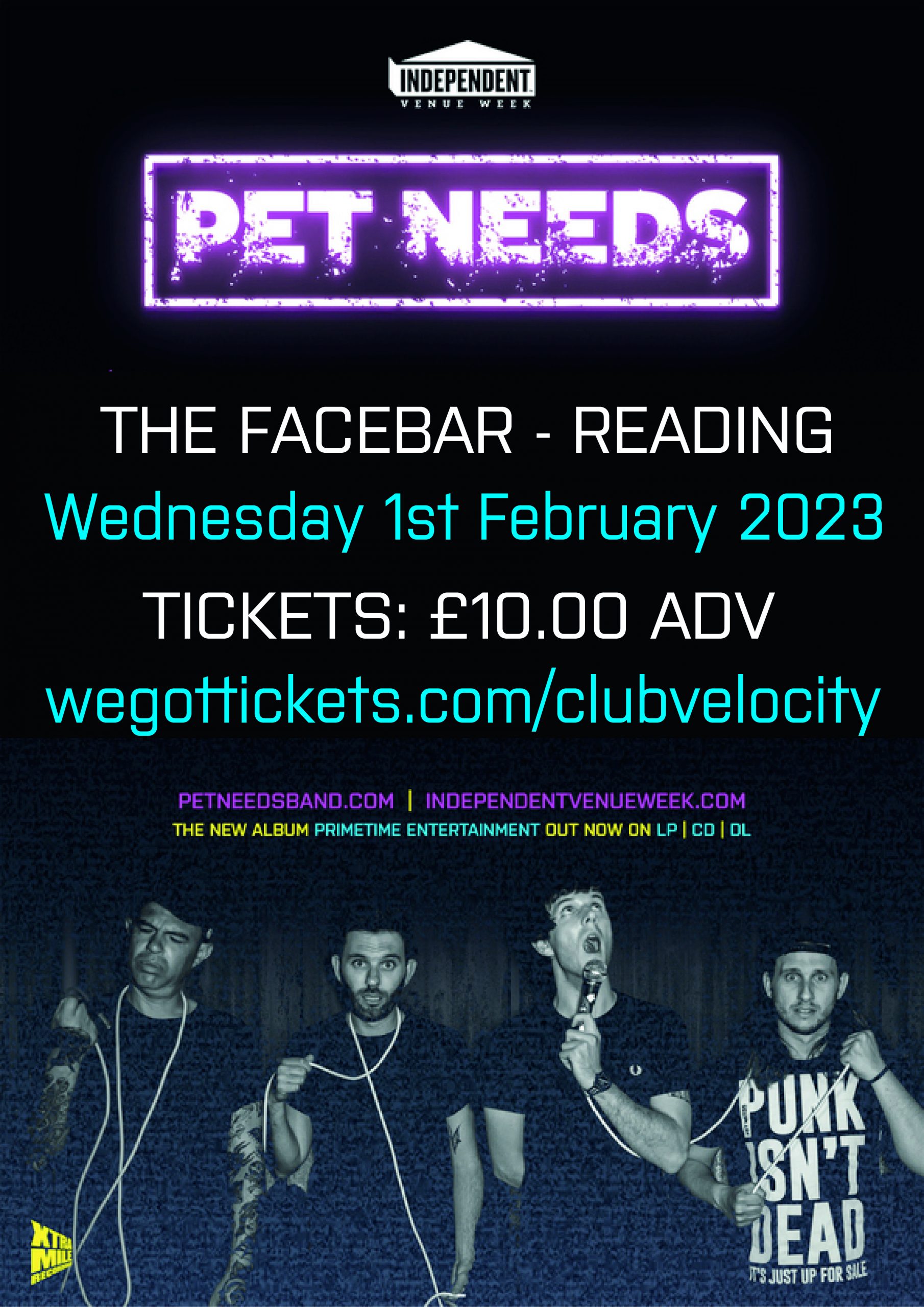 n 2020, the future for PET NEEDS, as with so many other bands, looked precarious. Now,in 2022, they’re poised to take on the world with the release of their second album‘Primetime Entertainment’. It’s been one hell of a ride so far.“We’d been together since 2016, we were having fun with it, a punk band playing punk shows to our friends,” says Johnny Marriott, singer, songwriter, guitarist. “At the start of2020, we didn’t know if we were going to carry on as a band. But we thought we’d throw everything at recording an album.”The resulting album,‘Fractured Party Music’,is that classic debut in that everything up to that point was poured into it. Yet it’s still a surprise to hear that thrilling, fan-favourite singles ‘Toothpaste’ and‘Tracey Emin’s Bed’ were written just two weeks before recording, showing the creative fire was still fierce.Whether PET NEEDS(completed by brother George Marriott on guitar, Rich Gutierrez on bass and Jack Lock on drums)were almost done or not didn’t matter because they refused to compromise on what turned out to be their saviour,an album brimming with intense resonance. Strewn with social commentary, the frenetic, kerosene-blanched songs flayed modern living, leaving it exposed and fully-examined incatharsis.Ithit more than a few searing chords and found its way to the ears of independent label Xtra Mile Recordings who promptly signed the band and released it in the middle of the pandemic in March 2021.The band’s humble nature meant that what came next went beyond all expectations. Starting with a few socially distanced acoustic shows with Frank Turner and other labelmates, it was the most people they’d played to-albeit sitting in painted circles separately-600 people in afield fit for10,000.Asshows started to open up again, PET NEEDS embraced life like it was on the verge of ending again.Their headline shows gradually grew in size;theylanded support slots with The Hives and Skinny Lister and recorded album number 2 with Frank Turner producing.Further dedicating his unwavering support, Frank then invited the band to join him on his worldwide touring plans that are running throughout 2022. The band dutifully accepted.The first half of the year has already included the vast European tour taking in Germany,France, Netherlands, Austria and more-winning over rooms of Frank fans everywhere they went.“We want to keep that DIY ethic,” says Johnny. “Because these are our first tours, Iwant to properly live it. I want to understand what we’re doing completely, and what everyone else is doing. We’ve jumped to doing these big tours when we haven’t properly toured before, so we’ve still got to pay our dues, lug our amps and sell our merch.”Next up will be joining Frank on his mammoth 50 States in 50 Days tour of the US throughout June and July and then finally across the UK in SeptemberandOctober.But though the hard work is being done, PET NEEDS are filled with purpose. “We’re having the best time. Just being able to wake up and be creative every day is really amazing.Psychologically, I’m in the best place I’ve ever been in, which is a real blessing.”It’s clear on their second album ‘Primetime Entertainment’ how true that is. Written andrecorded in the 11 months after signing with Xtra Mile, their second mirrors Johnny’s state ofmind, more than even he fathomed at first. “This is a much deeper, personal album. It talksabout me being quite self-destructive and recognising where I need to get better in myself. I thought I was writing a record that was about partying and I didn’t realise until we sat down and listened to the album from start to finish.” It’s hard to believe when the songs so deftly deal with fear, fatigue, adrenaline, failing and determination. But the music intuitively responds to the words, every screech, grind and melodic run laced with real-life experience thanks to the band’s insightful and instinctive musicality, so perhaps it was this that sofloored the songwriter, a vision he hadn’t thought he’d had