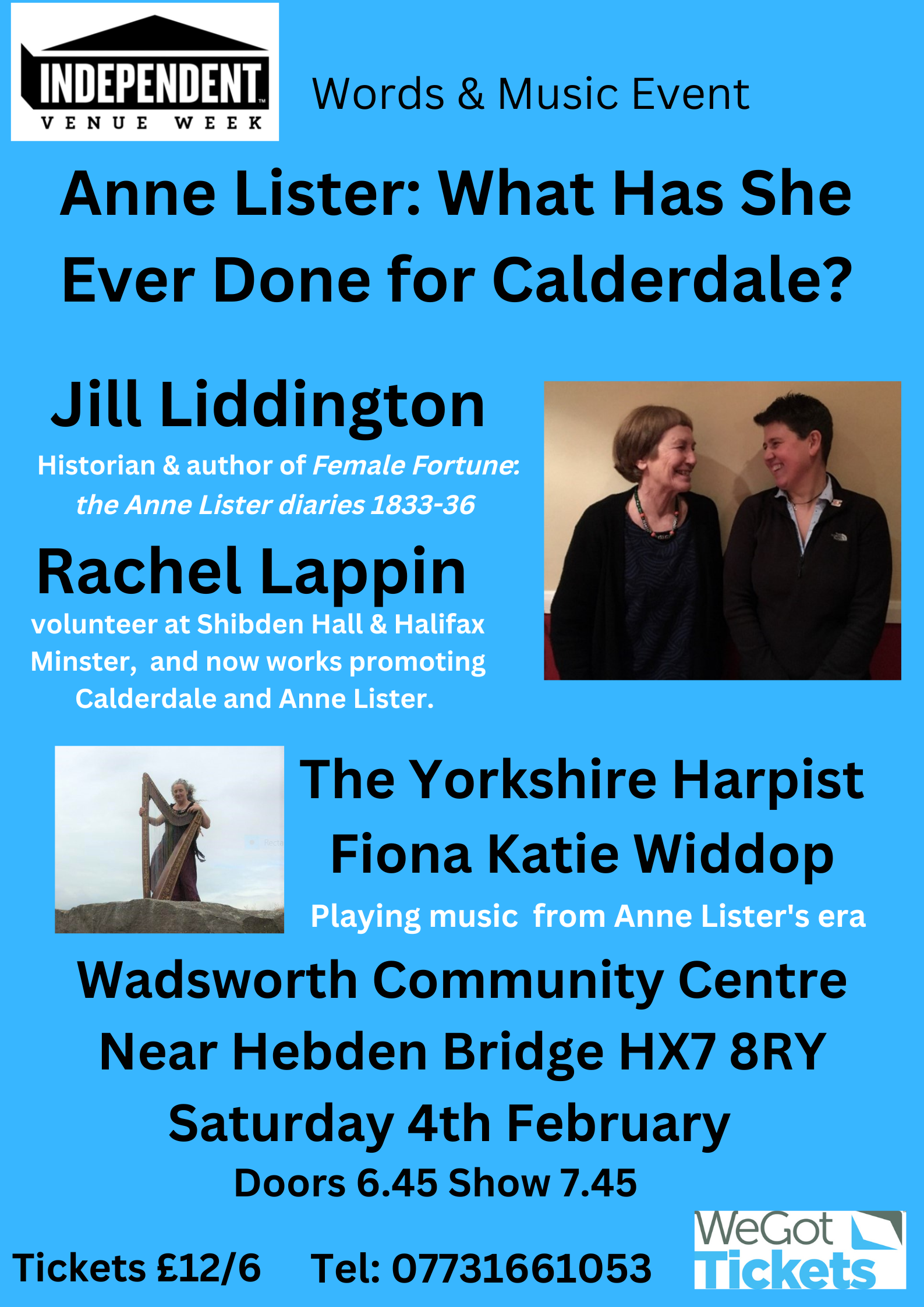 Anne Lister: What Has She Ever Done for Calderdale ?

An entertaining and fascinating evening examining Anne Lister and her impact on Halifax and Calderdale. A special event for Independent Venue Week. BGR Events is proud to promote two fine, knowledgeable speakers with talks, Q and A and in conversation: JIll Liddington, celebrated historian and author, and Rachel Lappin, Anne Lister and Calderdale promoter and enthusiast; plus Fiona Katie Widdop, dynamic harpist who not only plays, but also builds her harps playing music from Anne’s era. Jill Liddington is a feminist historian, who moved to Halifax in 1980, living just a mile from Shibden Hall. Her book, Female Fortune: the Anne Lister diaries 1833-36 (1998), inspired scriptwriter Sally Wainwright’s television drama series, Gentleman Jack (BBC1/HBO). Since 2019, this brought Anne Lister and Calderdale to global attention. Visitors from across the UK and beyond flock to Halifax to visit Anne’s ancestral home, Shibden, now a Calderdale Museum. Jill is an Honorary Research Fellow at the University of Leeds. A new edition of Female Fortune was published in 2022. She lives above Mytholmroyd, on the hillside along from Wadsworth. Rachel Lappin is extremely proud to live in the Calder Valley, and having previously been a volunteer at Shibden Hall, Halifax Minster, and for the Anne Lister Birthday Week. Rachel now works for Calderdale Council promoting all things Anne Lister and Calderdale to people from near and far. Rachel is passionate about the unique and beautiful area that is Calderdale, as well as its culture, heritage and the hospitality and tourism venues and attractions within the Borough. Fiona Katie Widdop, The Yorkshire Harpist’s love story with the harp began aged five after seeing a harpist perform on television. Spellbound, she would open doors and “play” them, pretending they were harps. After three years of constantly begging her parents, one Christmas, there it was.,her first harp. She never looked back. Her talent was affirmed with the attribution of numerous prizes and scholarships, and her passion for the harp took her on a musical voyage to France for intensive study, and to South Africa where she was principal harp with the Cape Town Philharmonic Orchestra. Now based in West Yorkshire plays various harps including the rare four sets of strings harp – so rare she had to build it and believes she is currently the only such player. Fiona lives on the moors near Haworth and teaches harp as well as having a collection of 33 harps. Cask Ales, Pie and Peas, and a warm Wadsworth CC welcome.