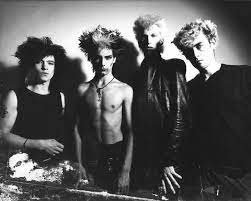 13th Chime formed in 1980 in the small London over-spill town of Haverhill in Suffolk. Born out of the British Punk scene: Vocalist Mick Hand, guitarist Gary O’Connor and drummer Ricki Cook were previously in The Antix while bass player Terry Taylor played with the hard hitting three piece, The Wynd-ups. As well as touring extensively across the UK, the band also released three critically acclaimed independent singles: Coffin Maker, Cursed and Fire but disbanded in 1983. After discovering all three 7” singles by 13th Chime, Caleb Braaten of Sacred Bones Records made it his mission to track the band down and released whatever material they had, on his Brooklyn based record label. This union sparked a renewed interest in the band, which inspired vocalist Mick Hand to form a new lineup that has since toured Europe, the US …and remarkably one unforgettable evening in St Petersburg, Russia. 2022 saw 13th Chime back on the road and in the studio again. All post-production profits from this event will go towards website maintenance and future uploading of images to www.punkintheeast.co.uk – the largest dedicated online library of UK punk rock ephemera, memories and photographs on the World Wide Web.