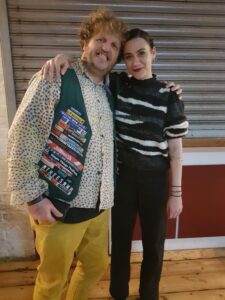 How do I start then – at the very beginning…….

I was filled with a certain sense of trepidation because this was my first tour. Over the next week I was going to be in new places every night, I would get used to how a touring band lives life on the road, new towns or cities every day, some of whom were places I had never been to before.

I was nervous when arriving into Leeds because I didn’t really have a good sense of my way around the city as I had never spent much time here before. I was hauling a heaving back full of clothes but luckily the hotel I was staying in was less than 10 mins walk from the station right in the heart of the city center.

Novotel Leeds – it was the kind of place which was clinically clean. Once I found my room, I found myself pacing around. I wasn’t used to having my own en-suite with a walk-in shower it felt like I was being primed for the ultimate week of pampering, gold star treatment!

I felt like it was all too much for me. I preceded to spend pretty much the best part of half an hour stomping from side to side of the room as I was downloading google maps which I used to find my way around Leeds.

So I set off with a brisk stride with my phone shouting out directions in a weird American auto tone kind of voice telling me which turn to take as I weaved on an outwards path from the city centre right into the student heartland. I completely forgot that the venue was quite a way out of town.

First stop of the Big Jeff IVW Tour was Hyde Park Book Club which was one of the more unusual venues that I would be visiting over the next week. Hyde Park Book Club is an ex petrol station turned vegan cafe and DIY gig venue. I was instantly hit by the sense of community that surrounded the place – it kind of reminded me of several places in Bristol The Exchange and the sadly defunct Roll For The Soul.

It had a certain sparkle to it, of course, but I was feeling a little bit like a fish out of water. I knew that once I got speaking to people that it would help calm me down and make sure that I was ok. I knew that I was in a safe space as my eyes crossed along walls adorned with a mixture of posters albums released by local artists.

I did find myself crawling into my awkward shell, because I didn’t really know anyone who was there. I ordered some food and sat at a table all on my own in a table in the center. I felt a few wandering eyes looking over in my direction, kind of like awkward pointing and staring. I have to thank the lovely Emily Pilbeam who is one of the presenters for BBC Introducing, because she helped calm me down by saying hello.

I met Tony Eirra who was promoting the gig that evening, which was being headlined by London-based DIY feminist afro punks Big Joanie along with support from Brighton based Maltese Riot Grrl, post punk outfit Genn and Leeds locals Lunar Sounds. 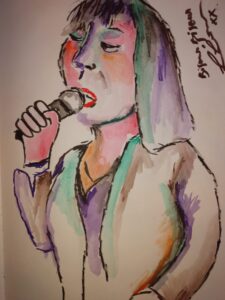 Tony runs a label called Come Play With Me which specializes in releasing split 7″ singles that are decided by a selection panel. So prior to the gig they had a selection panel for who they thought should be on the next release. The show was down in the basement and I began to feel a lot more at ease when I saw the stage.

One of the things that really helps me to start to feel at ease in any venue is seeing the stage and getting sense of the layout, because I then get a sense of where my safe spots are, which are usually down the front.

It’s like a focused space that usually I like to take up. I like turning up early so I can find my place and that I find it calming if people come and approach me.

I found myself over the years speaking to so many random people at shows and making friends that way. It also helped with tonight that I vaguely knew Big Joanie and that my friend Sarah, who plays in the excellent Esper Scout, were on hand. It also has to be said that the staff were really friendly. 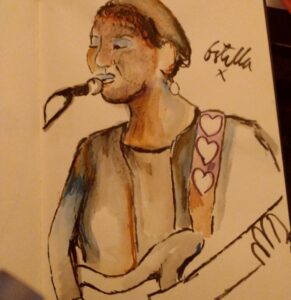 The one big foolish decision was to walk back to my hotel, as I have been having issues with my ankles and lower legs. It took me an hour and a half to hobble back to my hotel. I bumped into someone who was at the gig I think her name was Mel. She seemed a pretty happy lucid person, so we chatted for a bit whilst I hobbled along the road heading back into the city center.

Next day I got up to have a bit of an explore of Leeds City Center. I stumbled across the institution known as Crash Records, where I found myself procrastinating over records for the best part of an hour and a half. I was mostly procrastinating over the Mansion of Snakes album. I was seduced by the albums artwork it screamed psychedelia kraut jazz, it screamed cool. It was also a record that I had spotted in The Hyde Park Book Club.

Later on, I headed on my way up to Newcastle on quite a shaky train where I was sat nervously. I decided to give my friends in the band Martha, a virtual wave as the train rolled through Durham. I arrived at Newcastle station where I was met by Sybil Bell the Founder of Independent Venue Week. She took me to the apartment where we would be staying, I had my own room with my own bathroom, I was being treated like an absolute king.

I was staying with the entire IVW team (L-R above) , Chloe, Ruby, Charlie and Sybil and we all went for a pre-Independent Venue Week dinner, and spent all of the Sunday evening relaxing before a manic Monday. 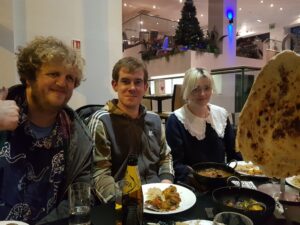 Monday, I found myself racing around Newcastle with Sybil and Chloe picking up the rider for tonight’s show with Nadine Shah. We went to this absolutely warehouse-sized Tesco’s, which was quite intimidating with its neon bright lights shining in my eyes and the odd airport styled walkway lifted people into the shop – it was kind of quite scary. 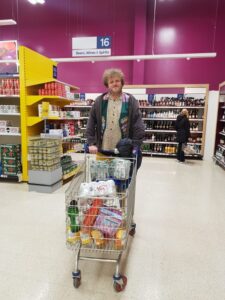 I got to have a glimpse of the beautiful arts venue the Sage that towered over the city and today was also the first day that I would get to see Steve Lamacq’s tour bus parked just slightly up hill from tonight’s venue. It was all a bit of a blur to be honest. 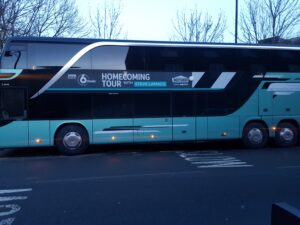 My first gig in Newcastle was an absolute banger with Nadine Shah performing in the legendary venue The Cluny. It was one of those venues that I had often dreamed about visiting because I had often seen the name appear on tour posters. I was kind of pinching myself – it all felt a bit surreal.

It kind of had the feel of an old watermill building as the venue lay right in the centre of a valley with water running nearby. The venue had a really warm, almost homely feel to it with artworks hanging off the walls, kind of like a cozy arts center but with the original layout of building nicely furnished, with painted arches. It definitely had a multiple purpose kind of feel.

I had a lovely chat with Nadine where I got to ask about things like;

What routines she has when it comes to preparing to play live?

How does she cope with the process of touring?

What was the best advice that she could give me preparing myself for the week on the road?

How she prepared for playing in different venues? 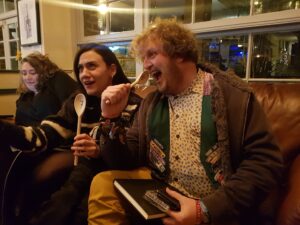 I found myself entering into the main room where the gig was taking place early so I could get used to the space. It had a slightly odd dynamic, with the stage tucked in the corner, kind of like in a mini vault , where in order to get onto the dance floor you had to climb down some stairs. I propped myself in my favorite safe space which was right up against the stage where I could get a sense of the room as it began to fill up with people.

As per most nights of the tour I would find myself bumping into various members of Idles Fan Group the AF Gang, they’re like the most positive cult.

Nadine Shah played a great set in a place that she very much called home, recounting the numerous amounts of times she used to be sat up on a table that overhung the stage where her family were now sat.

She gave me a massively flattering shout out. She also used tonight as a chance to preview as few new songs off her forthcoming album Kitchen Sink It was also the first night I would bump into Steve Lamacq, who was on tour for his BBC6 Music IVW Homecoming Tour.

A big thank you to the lovely folks at Crosstown Concerts for supporting Big Jeff, his blog and his fundraiser.